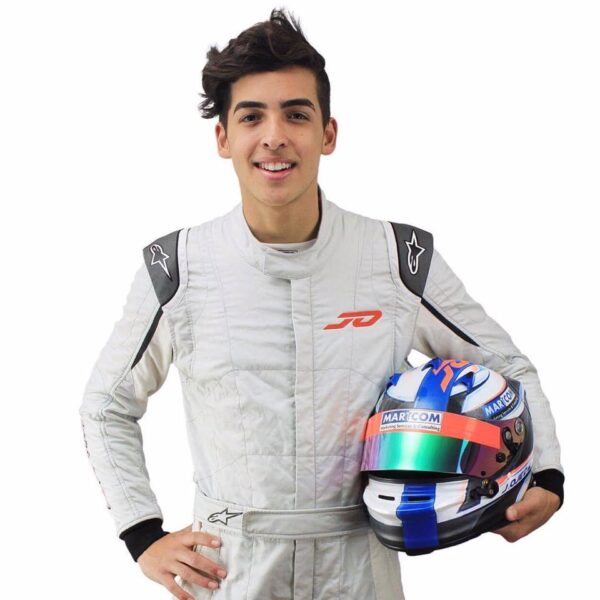 Jayden Ojeda has come a long way since he first started racing laps around his Claremont Meadows cul-de-sac as a 7-year-old boy.

He also represented Australia in the 2014 Rotax Max World Championships in Spain.

In 2016-2017 Jayden made the move to Formula Ford for two seasons before shifting gears again in 2018 to Formula 4, taking out that year’s Championship.

This year the 18-year-old has set his sights on the Super 3 Series, with his season off to a promising start.

Johnny H is proud to sponsor Jayden in 2019 and we’re delighted to have him on board as a Johnny H Ambassador.

Jayden’s journey and drive represent so much of the hope that we have for our own Johnny H members. We too believe that you can do more, see more and be more with a supportive team around you.

Johnny H scribe Janelle Estreich spoke with Jayden to give us a little insight into the world of our rising racing star.

How did you first get into racing?

My parents bought me a go-kart for my seventh birthday. I used to do laps around our cul-de-sac and then moved to the track from there.

When did racing switch from a hobby to a more serious pursuit?

At about 15 I hit a bit of a crossroads: go to a new category of go-karting or move to the Formula Fords. I had to take the path that would lead to a career and that is car racing.

For those Johnny H readers who aren’t too familiar with motor sport, can you break it down a bit for us…

Formula 4 is a stepping stone to Formula 1.

Formula 4 is a lot slower, with less power and people in the team than Formula 1.

This year I’m racing in the Super 3 Series, which is a development category and the third tier of super cars in Australia..

How is your season going so far?

I had a pretty big start to the year. I had a few one-off races in the Formula Ford at the beginning of the year and raced at the Grand Prix for the first time. It was pretty amazing to see how it all ran and see the people who are involved in that scene.

I raced at Bathurst for the first time this year which is one of those experiences that drivers want to tick off the bucket list.

In terms of the Super 3 Series, the first round was good. We finished all the races and got a good batch of points as well. I really enjoyed working with the new team and in a new environment. Hopefully throughout the year we can work our way further up the field.

[Jayden won his third race of the Series at Winton on May 26 when he finished as the Round 2 winner.]


You’ve achieved a lot at a young age — what drives you?

The support of my family is huge, they’ve supported me since day dot. Having sponsors get behind you also reinforces the belief that you can do it. Having great people around you fuels the ambition and makes you want to do better.

Has there been a stand-out career highlight so far?

The whole of 2015 was a real highlight for me. I won quite a few state championships, a national championship, and I represented Australia at the world finals. I also won the Rotax Pro Tour series which is an Australian title equivalent as well.

Winning the National Formula 4 Championship last year was really exciting. That first championship win in a car was a pretty big monkey to get off my shoulders.

Racing involves a lot of travel, where have you been?

Within Australia I’ve been pretty much everywhere along the east coast – as far as northern Queensland and south to Phillip Island. I’ve also ventured over to Adelaide a few times.

When I represented Australia, I travelled to Spain. That was my first overseas trip. We stayed on for a couple of days and spent some time exploring Madrid. It was really cool. There was a really historical feel in the streets and back streets.

Do you have a favourite place in Australia?

In terms of cities, I really like Melbourne (apart from the weather!). It’s easy to get around and I’ve made some good friends there.

If you could jump on a plane today, where would you go?

So what do you get up to when you’re not driving fast cars?

I’m doing a double degree in Business and Communication at Western Sydney University. I’m mid-way through my second year now; it’s a four-year degree. When I finished school, I wanted to keep studying and keep the doors open on what I do with that.

I’ve also started a new training program, so I’m training twice a day for an hour at a time, morning and afternoon.

There isn’t a lot of time outside of training, travel and study!

When I am home and I’ve got some time, I like to meet up with friends and just hang out.

Well you’re welcome to come hang out with the Johnny H crew any time.

Thanks! I’ve been along to a few Johnny H events now. It’s pretty rejuvenating to see everyone having fun together.

Being supported within a group really motivates you. Having good people around you gives you something to fall back on when things get tough and someone to share your wins with as well.

We wish Jayden well for the remaining 3 rounds of the Super 3 Series and look forward to seeing him at another Johnny H event real soon.