Johnny H Adventures is proud to sponsor the Sunbirds, a mixed gender netball team made up of all-abilities players.

The Sunbirds compete in the senior division of the mainstream competition at Blue Mountains Netball Association in Lapstone, NSW.

This year the Sunbirds celebrate their 10th year of competition, playing for St Finbars Netball Club.

Many of the original players are still involved and there are several Johnny H members among the ranks.

Johnny H spoke with Sunbirds Co-Coach Maria Cummins, who was integral in getting the team off the ground. 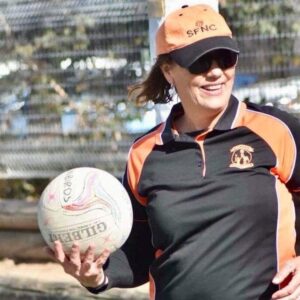 Maria, whose sons Patrick and Tim are well-known cricketers, has witnessed remarkable growth amongst the players, the Club and the sport over the past decade.

Here she explains how it all began and the impact the experience has had on everyone involved.

So, how did the Sunbirds come to be?

In 2009 I was talking to a family friend, Kim, at a party and she was interested in playing netball. Kim has cerebral palsy and was then in her mid-30s.

We were involved with the St Finbars Netball Club so I asked her if she would like to join a team. We registered Kim in a regular team, so it was a real unknown how it would go.

We went in thinking that everyone was on the same page as us but there were challenges, mainly around how to play with Kim and concerns about hurting her.

We were all a bit lost so Kim ended up helping Julie [Fehon, Sunbirds Co-Coach] and I coach our daughters’ team. That was fantastic and she really enjoyed it.

At the end of that year Kim asked if we could start a disability team. She really led that push and put an article in the Blue Mountains Gazette asking for players.

From there we were able to build a junior team (Sunbirds) and senior team (Brolgas) for the 2010 season.

St Finbars Netball Club and the Blue Mountains Netball Association were super supportive. There were teething issues in that first year so we created some written policy on how to play against the team and how to umpire to find the right balance. 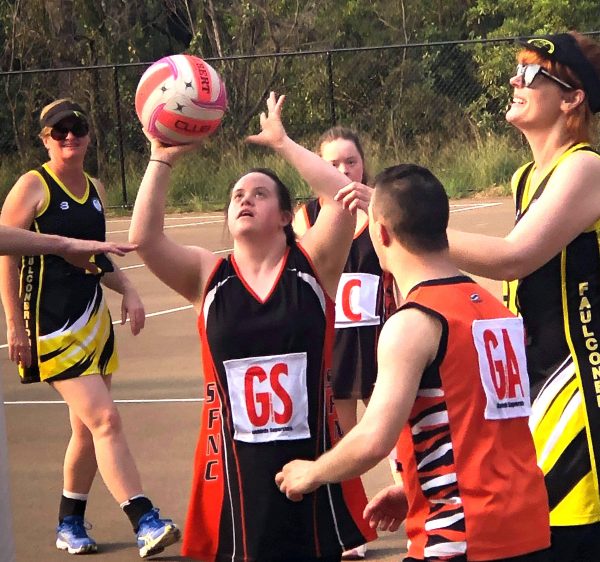 Are many of the original players still involved?

We now have just the one team as our junior players have gotten older and moved into the senior division.

The junior team finished on a high five years ago by getting to the grand final and lost by one goal against another St Finbars team.

There are 11 players in the team including seven players from the original teams.

The players are all ages – the youngest being 16 – and have a range of mild to moderate intellectual disabilities.

They’re all super active and involved in lots of different activities, like music, dance, boxing and soccer.

Some players who are less steady on their feet have a coach or player stand next to them to assist if they need it. This ensures everyone is included and protected at the same time.

We’ve had players go on to play netball for the State.

One of those is Dallas, who plays for NSW in the Marie Little OAM Shield [a national tournament contested by State teams of women with an intellectual disability]. Dallas was Vice Captain of that team for the past two years.

This year the Sunbirds celebrate their 10th year of competition. Did you imagine the team would still be going a decade on?

Yes, definitely. I always hoped it would be long-term and continue to grow. We also wanted to make it sustainable.

A couple of years ago we won a grant to put five of the players through a coaching and umpiring course. We set up a seminar to go through the online course and then Netball NSW put on a practical session for them. They were tested and all passed as Level 1 coaches.

Netball NSW also runs clinics for all abilities, so they’ve been invited to go along to those.

Our hope for the future is that they will be able to train themselves and train others to keep it all going.

We’ve had great support on all levels and the Blue Mountains being the community that is it, it was a great place to be accepted.

We’re also part of a bigger group of all-ability netballers in NSW and around Australia as well. It’s a real plus for the team and the sport to be part of growth like this. 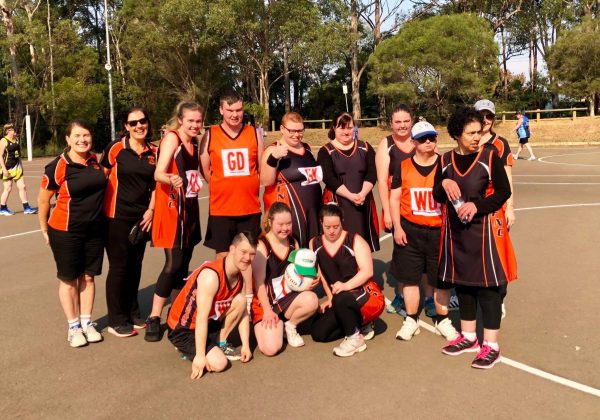 What impact have the Sunbirds had?

That first year I was disappointed in other people’s reactions to the team. Some players felt they had paid their fees but couldn’t have a proper game against us. Some felt the team shouldn’t be playing in a mainstream competition.

Once the games got on and everyone could see how the team played, those people are now among our biggest supporters. People are so welcoming, we’re part of the furniture now!

It’s heartwarming to see that response and to see how much the families are getting out of it too. We’ve had sisters play with each other and mothers play with their daughters, so that’s really rewarding.

Just seeing everyone improving every week, being willing to take on advice, and that wonderful aspect of being part of a team has given the players renewed energy.

You can see that their lives are expanded by the experience. People ask the players about their netball, they’ve got friends who they play against, and people recognise them.

No one can imagine the courts on a Saturday without them now I think.

You can go along and support the Sunbirds on Saturdays at Explorers Road, Lapstone. Game times can be found here.